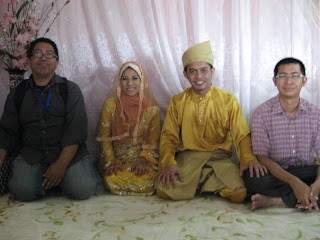 As usual I woke up late today to work. Been working on DDT cover design last night. Since I was still in bed till I'm on my bike to work, tonnes of SMS came into my cellphone inbox.

Just recently he came along with Dum Dum Tak when we played New Era College, Kajang…and went makan satay kajang together and I sent him to KL Central later that night.

Just recently petang raya haji, he came to Kuala Terengganu and we (Syukree, Fazri DRSA zine+wife+kid, and i) went to Sedang (Sleepyjeremy vocalist) wedding and lepak at Fazri and Shabri (Kasih Sayang) house for a cup of tea. I sent him off to Masjid Ladang later than evening.

Just a few days ago I watched his ‘demo separuh bogel’ video and laughed at how crazy this guy is.

Syukree might be a pain in the ass most of the time, but…really he inspired and did a kick-start to the Terengganu DIY (3rd generation?) scene back in 1997/98 with his ever-so-controversial fanzine, Chaos PS (PS stands for Pulau Serai his kampung). After his zine was released, we saw zines like DRSA, Narrator, Go Str8 Down and also Mosh arise…

Yeah, he’s a good-hearted guy. I still remember as we drive in Kuala Terengganu petang raya haji, he told me he just closed-down his long-running blog at hatiku dot blogspot dot com. He love the blog so much. He said it’s because hatiku has hurt a lot or peoples’ hearts.

Email ThisBlogThis!Share to TwitterShare to FacebookShare to Pinterest
Labels: news

check these out too